Call us at (816) 474-2900 to schedule your test drive on this Race Red 2012 Ford Focus SE. We are open for business and we’re prioritizing your health and safety. Test drives delivered to your home, deals made over the phone or email, complimentary delivery of vehicles and paperwork. From the comfort of your home you can shop, get pricing, and trade value. We will deliver your vehicle and paperwork. Certified. Race Red 2012 Ford Focus SE FWD 6-Speed Automatic with Powershift 2.0L 4-Cylinder DGI Flex Fuel DOHC Odometer is 4062 miles below market average! Certification Program Details: 6 month 6000 mile Power Train Limited Warranty Awards: * Car and Driver 10 Best Cars * 2012 IIHS Top Safety Pick * 2012 KBB.com Top 10 Coolest New Cars Under $18,000 * 2012 KBB.com Top 10 Road Trip Cars * 2012 KBB.com Brand Image Awards Car and Driver, January 2017. Reviews: * * Choice of sedan or hatchback * Choice of traditional gasoline engine or all-electric Focus EV * Fuel efficiency up to 39 mpg * Offers some amenities and safety features * Surprisingly robust tech features like in-car Wi-Fi available Source: KBB.com * Nimble handling; refined and quiet ride; stylish and well-made interior; lively engine; abundant list of upscale and high-tech options. Source: Edmunds Want to know more? Text us at (913) 215-5243 to chat about this vehicle! Oakes Mitsubishi strives to bring you the lowest prices possible, not just in the Kansas City area, but the entire United States. With our laid-back, quick and pain-free sales process, our high standard of customer service and our many financing options, we know you will find Oakes Auto to be a welcome change from your past experiences. All of our vehicles are reconditioned at our state-of-the-art service center and undergo a multi-point inspection to confirm they meet our expectations for our customers. Vehicle price as shown includes $1000 Dealer Discount, $1000 Trade-In Discount (requires 2013 Model year or newer and less than 100,000 miles), and Finance Discount (requires financing through Ally Auto Finance or Kia Motors Finance; not all buyers will qualify. Located in Kansas City: 7301 State Ave, Kansas City, KS 66112 (913) 222-5300.
Model Overview
The new Focus is offered in 4-door sedan or 5-door hatchback forms, in S, SE, SEL and Titanium trims-although hatchbacks aren't offered in base S form. S and SE models can be had with either a 5-speed manual gearbox or 6-speed PowerShift dual-clutch automatic transmission. SEL and Titanium models only come with the automatic.

All but the electric Focus include a new 2.0L direct-injection 4-cylinder engine, making 160 horsepower and 146 pound-feet of torque. Ford's Ti-VCT variable valve timing system helps provide stronger response through the rev range while saving fuel at other times. Ford anticipates up to 40 mpg on the highway.

With a 4-wheel independent suspension-combining a semi-isolated front subframe and a control-blade multi-link rear suspension-along with 4-wheel disc brakes in all but the S and SE models, the Focus has stronger performance credentials than most small cars. The suspension is tuned to be quite firm yet has enough give to soak up heaves and potholes; Ford's electric power-steering system provides good steering weighting and responsiveness as well. In addition, a new torque vectoring system, included with the standard stability control system, balances torque delivery between the front wheels for better poise out of corners.

With an all-new shape influenced by what Ford calls 'kinetic design,' the new Focus sedan and hatchback employ some of the same design attributes ahead of the rear doors, with a crisp, narrow grille, lower trapezoidal intake, steeply sloped windshield and a deeply sculpted hood and front fenders. Deep creases running along the doors also accent the wedge-like stance.

Front seats in the Focus are supportive buckets, with even better, firmer bolstered ones provided with the Sport Package. Both the sedan and hatchback have about the same back-seat space-just ample for most adults. Cargo space is quite generous in either model, with a relatively wide trunk opening in the sedan. In either model, the back seat folds forward nearly flat.

All Focus models but the base S come with Sync, which provides voice-command-based connectivity with phones and media players and can perform other actions such as reading texts. A new feature called MyFord Touch is included in all Titanium models (optional on SEL) and brings a huge, colorful eight-inch touch-screen display, which can also be controlled through steering-wheel buttons. This system includes more advanced voice control for climate control, entertainment, and other vehicle functions, and can also turn the vehicle into a wireless hotspot with a USB-based cellular data modem. It's also packages with an upgraded Sony sound system, as well as satellite radio and HD Radio with an iTunes Tagging function. Other available features in the Focus include multi-color interior ambient lighting, a rearview camera, push-button start, and an Active Park Assist system that steers the car into a parking spot while the driver only modulates the brakes.

Ford has made a limited number of battery-powered Focus models available in some markets for 2012. The Focus electric is very similar to the conventionally powered model, includes 17-inch wheels, a Sony audio system, SYNC and a choice of cloth or leather seating. Base prices start around $39,000. 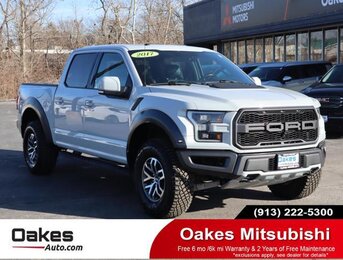 2017 Ford F-150 Raptor
Gray
* Pricing - All vehicle pricing shown is assumed to be correct and accurate. Incentives, credit restrictions, qualifying programs, residency, and fees may raise, lower, or otherwise augment monthly payments. Additionally, incentives offered by the manufacturer are subject to change and may fluctuate or differ based on region and other considerations. Unless otherwise noted or specified, pricing shown does not include title, registration, or tax fees and costs.

* MPG - Vehicle information, as well as features and other inclusions, may vary by model and are based exclusively on standard equipment. No claims, warranties, or guarantees have been made related to the accuracy of customer payments, model equipment, or vehicle pricing. Please call with any questions you might have and to reassert the accuracy of any information presented here.
Close
Close
© 2022 Oakes Auto | Privacy Policy
Much from Remora
Send Now
Close
Share Search Results